If your gut instincts are well tuned in then you know pretty quickly when you’re being led by a wrongun. I can safely say my gut has recently been jolted into overdrive, and my big challenge is what the hell to do about it.

I believe that there is a widely held public view that to get to the very top in the corporate world you must be a bit special. Sure, often this view is counter balanced by envy. The top CEO jobs are very well paid – probably too well – and even when things go badly wrong, there always seems to be a clear path for them to a stress free future. Very few if any, go to jail. Public humiliation is rare, and even when it does occur tends to only be brief. Financially you hardly ever hear of retired CEOs in the poor house. Parachute payments, sadly, are still the norm. None of this makes them universally popular characters. However, despite this widespread jealousy of the individuals concerned, there is normally a begrudging acceptance that they must have more than a modicum of talent. Well, in one particular case at the very least, I’m here to dispel that myth.

It is hard to overemphasise just how critical the role of being leader is, in a large corporate organisation. Quite simply, they set the tone. And the very pulse of the organisation depends on their daily interactions. Every movement and word is scrutinised by a hungry and curious followship. When it works well it is as beautiful as corporate life gets. You can feel the respect and pride oozing along the corridorial arteries, and you know that commitment and motivation will follow. But what is even more palpable is when the opposite happens – the rotten stench of a bad CEO. When “bad” CEO follows “good” CEO, such as in my current situation, the contrast is like a destructive stormy night following a glorious sunny day.

My example is as stark as it gets and more extreme than I’ve witnessed or indeed heard of. From the outset our new CEO had the corridors – tellingly including the Executive team – agog with quizzical looks and boundless chatter. Plucked from a career of obscurity, stagnation and decline in far flung places, the initial appointment was met with more than a few raised eyebrows. But corporate clans are a forgiving bunch and a “wait and see” approach was silently communally agreed. His initial actions post landing gave some early warning signs of what would follow. A total introvert with an aversion to meeting people in the business, even in the comfortable confines of corporate HQ. He very rarely left his office other than an occasional startled scurry to the gents. His initial spiel was a seemingly simple mantra about the future yet full of confusing buzzwords and jargon which were deliberately left floating and unexplained for the masses, and without any linkage to the here and now. Sadly this was presumably the same pitch that won him the gig – under the presumption that he would be one of a new breed of savvy rock stars of industry – how wrong it would prove to be. He showed seemingly little interest in the real current challenges or indeed in listening to any type of alternative view on anything. For the Exec team, these were major warning signs that bonded the top team in many ways, but bonding as a unit around the negative idiosyncrasies of the leader is not a long term recipe for success. For the wider team things all just seemed a bit odd.

More than a few months in and the corporate clock was impatiently ticking for a sign. Eventually he realised it was time to make his mark. Make some decisions. Show his worth. And boy were some of those interesting and with some pretty visible paradoxes. Christmas celebrations were effectively cancelled for the office due to potential budget challenges. Yet the Exec team were forced into secrecy about their multi day mid December overseas team building event staying in a top class hotel with no expense spared on dinners and wine. Sure, we were to a degree duplicit in this by being there, but it was not a unified ship. Especially when it came out that in fact our head honcho and family had been there a week ahead of the rest of the troupe, enjoying the location and obviously some critical reasearch visits and meetings. More followed. CEO office expenses and “corporate costs” rocketed. Personalised parking returned after many years – CEO only of course. Tellingly “We” became “I” – until something went wrong. No issue was ever met anymore with “ultimately its my responsibility”.

Then came the new hires. A small army of like minded under achieving twaddle peddlers. The mood of the business moved steadfastly and in unison from “wait and see” to “don’t like this much”, which found its way very clearly into the culture surveys. Predictably however, this became twisted to be the fault of the team members themselves, not the leadership, as the team members clearly didn’t understand “the big picture” and therefore needed to be changed. And change they did. But as in all such cases, mostly the ones that headed for the door were the best ones that weren’t meant to go.

I really could go on. Tried and tested channels of communication, feedback loops and simple management processes were ripped out without any question or doubt. Strategies were unveiled without any Exec team consultation, and in one memorable case, with an admission that it had been pulled together in a 45 minute spell pre his 5pm home time just the day before. Telling vitriolic blasts at executives clearly needing, and asking for, help and support. His self proclamation and subsequent denial of his own status of being a “guru” figure. Total angry denial of decisions he made despite them being witnessed by many in the same room. The appalling speeches – whether to the full company or to supposedly important and poignant events such as leaving dos for life long team members. Steadfast in my memory is the leaving homily given to one 30 year veteran recovering from health issues – “well let’s face it, it’s a better way to leave than being carried out in a box which you nearly were. None of us want that. Even though it comes to us all.” Recover from that! All attempts blurred into the same mush of embarrassment, inadequacy and insincerity.

All this is clearly very distressing for the whole organisation. But so what? Ultimately just to bleat and whinge serves no purpose in life. It leads me to reflect on three things. First, I have tried to understand how it could’ve happened, so that i can try and prevent it from happening again – at least anywhere I hold some sway. Ultimately it is a Boards role to appoint a CEO. And to remove one. However a savvy Exec team member needs to talk to its Board and build a rapport. It’s no good leaving it to the CEO. One day they will either not be there or not be listened to anymore as an alternative will be being sought – almost always without the CEOs input. It’s even more dangerous to leave Board / Exec team rapport building all to the Board. Ultimately well intentioned, but almost always too far detached from the daily trials and tribulations of a large corporate, and always incredibly time challenged. It’s also very easy for them to fall to expansive patter in the recruitment process. Your job as an Exec is to make sure that this is not all the are relying on. Give them context, perspective and an honest and bold appraisal of what the business needs. Stick your neck out. I didn’t, neither did my peers, and we are paying the price.

Next, just why is he so bad? And why doesn’t he know? To be able to answer this it should be possible to spot the signs if they appear again, and run a mile. I genuinely believe that a huge part of being able to successfully lead people is born from taking time to listen and understand them. The same should be true of those alongside or even above you. In my current situation I really have tried. I’ve listened hard, studied his profile, his way of working and interacting, and adapted my approach accordingly. I’m proud to say I’ve had some real success with this approach with him personally, but it does not mean you have to like what you find. My confident analysis of his forensic make up is that he is built in equal measure from three things – strategic thinking, fear and arrogance. Sadly only one of these can have shone through in the recruitment process. Unless arrogance is now seen as a virtue as well. I now sense that most of the strategic thinking has come courtesy of Google. The fear is the one that will win out in the end – as I think he does know just how woefully out of his depth he is – but what damage will have been done by then is hard to say. 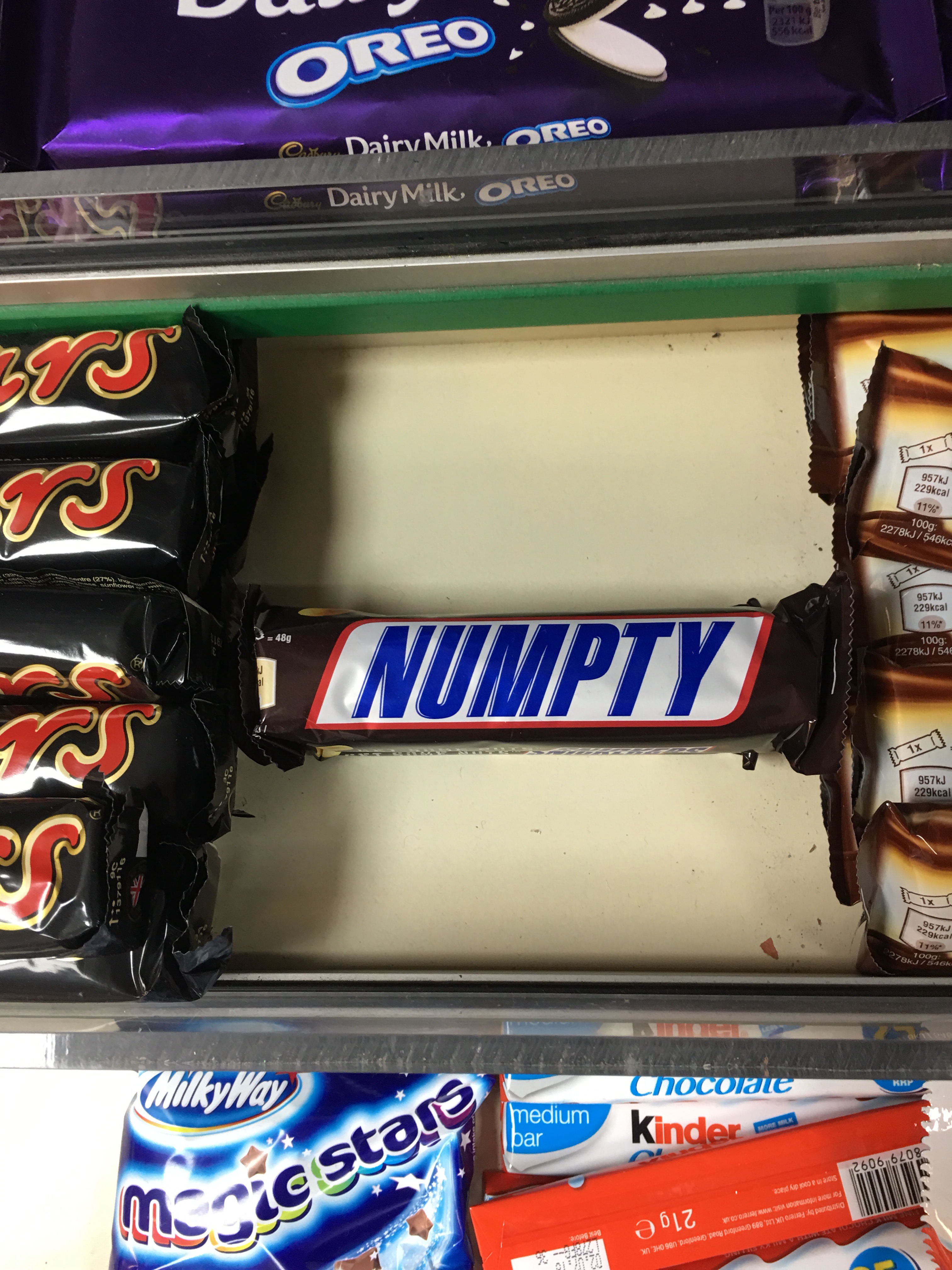 Finally, what do I actually do about it?
I’m over trying to delve deeper to understand him better. I do. He is a prize winning twat of the first order. The question is do I put my money where my mouth is and abandon ship, or do I fight from within. I truly believe in the business I’m proud to work in, and I want to continue the enlightening journey that I and others have taken with the organisation, but deep down I feel I know the truth. You see ultimately, it’s the leader who becomes the personification of any business. If you work out that yours is a talentless, vacant, vain numpty – though you’ll do well to find one worse than mine – then you need to act. Life is too short.