To achieve success and longevity in your Executive life you will require a certain number of key “skills” that you need to be able to seamlessly pick up along the way. It’s not a long list – relatively short on substance as well as quantity in truth – but it is essential to get to grips with to get on. The ability to concisely yet confidently make an impact in meetings, the ability to listen and support your colleagues and team, the ability to nod along enthusiastically to the boss when feeling anything but, the ability to spout twaddle when necessary and the ability to present well. Among these, building the skills and experience to nail presentations is one area that has brought a good degree of mirth and enjoyment to my particular Executive journey.

My first foray into the world of presentations was of course in the training room. I, along with my fellow lucky grad trainees, were put up on a week long “essential skills” course at the companies remote run down country retreat, only a few weeks post our arrival. Woodland walks, three course meals, on site pitch and putt and a private late night bar were all very positively welcomed by this bunch of keen but previously impoverished ex students. Less so, or at least in my case, was the course content. Courses can sometimes be fun, but are very rarely relevant to the real world outside, and this was no exception. Apart from the half day dedicated to presentation skills. This I found useful. Not so much for the tips or the practice, but for the drama of the live run through in front of seemingly key company execs at the end of the week. My part went ok, no drama, no fuss, no real impact, but no disaster. Learnt something. Done it. Box ticked. Tuck it away for the future. No, the drama was all about the marketing girl that followed me, Isla. Less than 2 minutes into her spiel and she lost her train of thought. I can still see her flustered face as she froze. And stayed frozen. We all watched on, mesmerised by this most personal of humiliations, unable to do anything about it other than give meaningless and fruitless gestures and urgings of encouragement. After what seemed like a lifetime of rigid panic, emotion overwhelmed her and she ran for the side door awash with tears. Clearly with more experience someone would have done something to avert or foreshorten this regrettable episode, but we were all too young to know. In my mind, to this day, the picture of Isla’s frozen face remains a beacon of what can happen if you let fear overtake you and are unable to keep things in perspective. Far better to brazen it briefly than to freeze forever.

For me, my first “real” exposure to a big crowd and a tough task was to be best man at a mates wedding. Said mate had managed to land himself with the daughter of the richest and most well connected local magnate in the area, and the stakes were high, particularly on behalf of my mate, who was far from popular with the magnate and crew. The large crowd that night were packed into a jumbo marquee on the family lawn, and were 90% business contacts and 10% friends and family. A veritable fun-fest awaited. Nerves were finely traded off against a particularly fine list of wallet churning fine wines. All was fine. The key was working out quickly that audience wanted to laugh. The jokes and anecdotes flowed straight from “The Bob Monkhouse guide to best mans speeches”. Twenty five minutes later I slumped back into my seat. Job done. Success was declared and true celebration ensued. Perhaps too much. At the end of the night my final task was to take the mike and on behalf of the joyous throng, wish the happy couple well as they exited the tent stage left, and explain that the bouquet would not be thrown as per tradition, but instead would be placed on the brides recently departed and dearly missed grandmothers grave. Easy really. Except that drink had muddled my mind and I opted to drop the “grand”. I can still hear the long stony silence and then the shrill tones of her mother’s humourless voice as she shouted across the driveway – “I am not dead”. Lesson learnt. Practice hard, and it ain’t over til it’s over.

Things developed well for me on the work front and training courses turned into real life presentation opportunities. Some went well, some not so well. But no one died. Although admittedly a couple of times it felt close. One time I was given a tough gig with a hostile crowd from a different functional area. Not made easier by the memorable introduction I received from the Head of Dept. “Now, we all know the huge problems we’ve had with this department, but it’s not because the people are wankers, and here to talk about it is…” I’m still not sure if I launched my presentation with an open mouth or not, but there certainly weren’t many open minds in the crowd. Another favourite was being thrown in at the last minute in a new department by my new boss -Teflon Jim – to present the Christmas plan. I knew little about it other than it was a very tough ask with very low to no funding. First question from the floor – “can you please tell us how the hell are we supposed to achieve this given all the cutbacks?” Now i believe you learn a bit from every boss you work for, and I’d already learnt a bit from Teflon Jim. To this day, there is still a part of me that’s proud of my response. “Yeah, it’s a tough challenge. Next question?”

As is often the case, the best bit of coaching / advice I ever received on how to nail a presentation, was incredibly simple. Admittedly it was tailored to me and my own individual foibles, so it may not be relevant to everyone, but it’s simplicity is. The 3 P’s. 1. Pause. I had a habit of rabbiting on and losing people as a result. By dropping in very deliberate and sometimes uncomfortably long pauses, it somehow keeps the audience engaged and on the edge of their seat. 2. Plant. Another unnerving habit, this time hoping from foot to foot. By simply focusing on firmly planting both feet this was eradicated, as was a further excuse for the audience not to focus on my material. Finally, predict. I like this one. Hold back before skipping to the next slide, but still talk to the headline. It really makes your audience believe that you know your onions, because you know what’s coming next. All incredibly simple but hugely effective. And all I have to do every time I get up on stage is remember the 3 P’s. 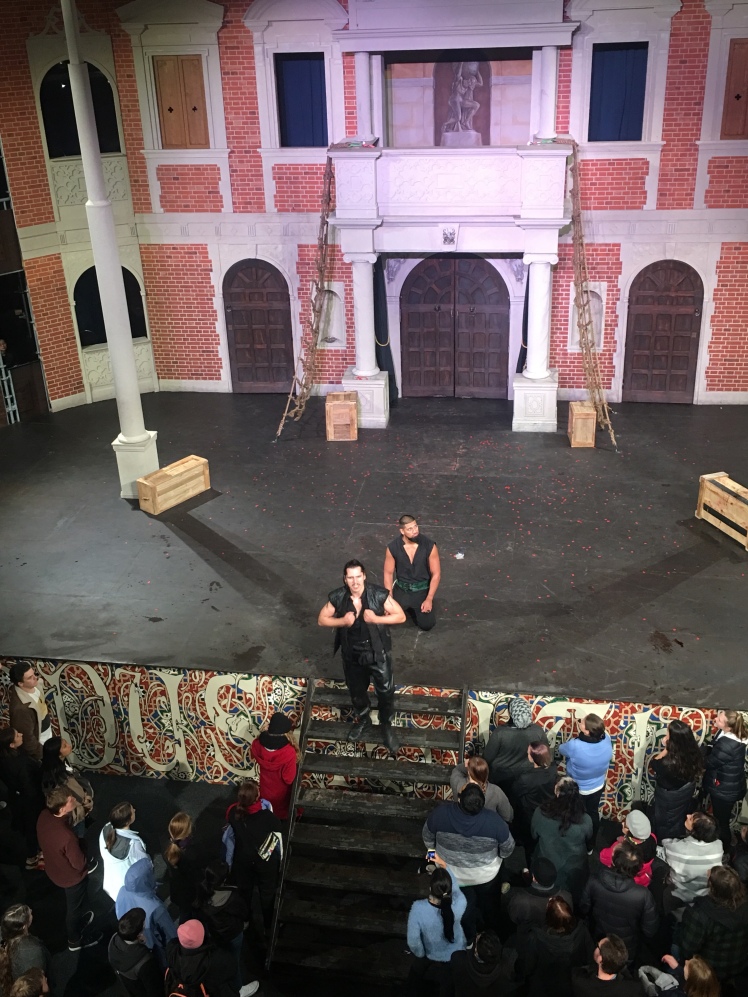 It’s also an incredibly useful reality check to watch the presentations of others – colleagues, peers, bosses, theatrical empresarios etc – really closely. Your first instinct will be one of self comparison and likely fear as a result. Don’t sweat it. Work out what it was you liked about their presence, content, swagger, confidence – and then work out what you can steal from it. It’s all just an act after all. The more amusing reflection time is when you realise that in fact most of them actually aren’t that great – it’s just that your fear is only helping you spot the good stuff. There’s a whole host of things I’ve witnessed over the years – abject mumblers, techno blamers, and my most favourite the wildly over the top dramatist. In truth all you should ever try and do is be a slightly louder, slighter bolder version of you real self. Aim high. Everyone has their perfect presentation within them. I was lucky. I had the opportunity to nail my best ever presentation, my career pinnacle, and I knew it was going to be so even before I walked in. A huge transformation project that had gone far better than anyone dared to dream it would. This was the parent Board post project. Set in a private club, during an incredibly lavish dinner. I knew my material back to front, and performed the 3 P’s. And I nailed it. Whenever my doubts creep in – and they still do – I take myself back to that moment in time.

So, what have I really learnt? Well, to nail a presentation in a way that will enable you to do more than just get by, I recommend the following 3 key tips.

1. Remember. You will never be the worst at this. There is a multitude of over arrogant mumblers out there who will think they are the bees knees at this, along with everything else, and are actually clueless. You are way better than that.

2. Use a little bit of humour. Even if you know you are not naturally funny, or are German, slot one or two semi-gags in early and you will get the human elements of your audience on your side for even trying. The inhuman elements will be a pain in the arse whatever.

3. Don’t freeze. Do whatever you can do to banish the fear and the wobbles. You know the drill. Audience in their pants. Practice in the bathroom until you’re sick of it. The 3 P’s. Do whatever works for you but at all costs keep it in perspective. It’s not life and death. I often wonder what happened to Isla from marketing. I really hope she found her way. Find yours.