It has long puzzled me why so many travelling business executives wear the “so busy working I saw nothing of the country” badge with such blatant pride. Instead they should be apologising for their own arrogance and stupidity. Just soooo busy! Indeed I have known many high level expat execs who have literally left after spending years in a country, without ever having opened their eyes to anything that is not put in front of them on a business related plate. Well, bully for them. I am proud to say, I have never been a member of this particular ego (usually macho) club. Life is for living, and travelling widely as part of your job should be an honour. Getting a glimpse into how different cultures live, thrive and survive should be treated as a privilege. These days for me, perhaps because the trips seem to be drying up a bit, I appreciate it even more. Just recently I spent a wonderful day in the industrial heartland of China. And with my eyes wide open, hungry to experience and to learn.

There are two ways to plan a trip like my brief jaunt into deepest China. Meticulously or by the seat of your pants. My particular skill set and psyche is more aligned to the latter. It gives you a far better appreciation of the surprises a place can throw at you. I did at least manage to painlessly secure a visa, and then google the seemingly small provincial town I was travelling to, in order to conclude my research. When I finally found it on the map my first question was whether it was big enough to have an airport. Further swift investigation showed my it probably was, as 6 million people lived there. (This “fact” was later lambasted on the day of my visit by my hosts as being well out of date – there are now over 10 million). The sheer scale and intensity of the place coupled with the unrelenting pace of change makes a visit to any part of China an ongoing and all out assault on the full suite of senses concurrently, which you will either love or loathe. Luckily I love it.

The day started early, with the dawn plane journey up to the inner hinterland. I found myself joined on the plane by a surprisingly high number of foreigners both western and south Asian, a very eclectic and multicultural mix. Incredible to reflect that only 10 years ago I remember my feelings of both excitement and embarrassed isolation on similar trips when, regularly as the only foreigner, I was pointed at and whispered about, and photographed as a sort of celebrity come freak show on a very regular basis. None of that now thank God. The world marches on, and in China, still at a faster pace than anywhere else.

As we descend, multi coloured patchwork quilt strips of land spread out below us. They are surrounded by row upon row of identical living quarters both high rise and low rise, which are in turn intersected by vast multi-laned highways. And everything is shrouded in that shimmering layer of endless hanging smog. The inner China heartland is laid bare in all its humdrum glory, for the aerial passengers delight and delectation from above, as the soothing operatic music heralds our imminent arrival. 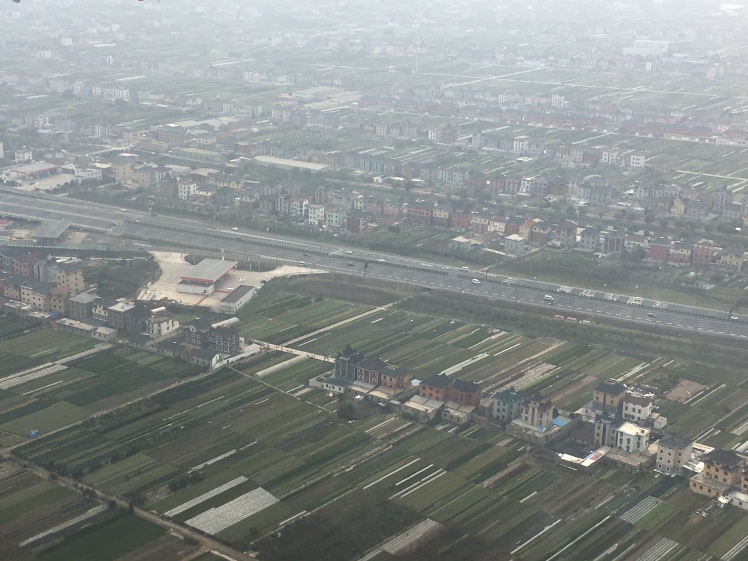 Just as eye catching is zooming past the same housing once on the ground, although the average speed on the six lane highway means you don’t get long to take it in. The standard type of modern dwelling seems to have moved away from the blemish that is the concrete skyscraper, and in its place seems to be the 4 storey replica of an Amsterdam townhouse each slightly different and all resplendently boasting their own turret or viewing platform at the top. The only problem of course being the view.

But wait, I’ve jumped ahead. The full arrival process through the modern airport still feels over officious and spine chilling to the average foreigner. You have to respect the way the queuing system unashamedly favours the countries own residents, processing them quickly and effortlessly whilst the rest form a long queue for the slower and more meticulous visitors channel, with just two of the 12 desks open. Even Chinese immigration is updating it’s image though, and facing in to the looming global phenomenon that is customer service. My favourite nod to this was the installation of the smiley face / angry face buttons to provide feedback on your immigration experience. These are not new, but elsewhere they tend to be surreptitiously placed at the end of the process, once clear of prying official eyes. Not so in China. You press the button whilst facing your immigration nemesis. Indeed a digital helper appears on screen and chirps at you, in English, asking you to please give your feedback, there and then, directly under that steely gaze. Woe betide if you press the angry face. I choose to pass.

As ever the company arranged internal transportation involves speed, smiles, comfort and an over reliance on non verbal communication. I soon give up on this and instead focus on taking in the alien world rushing past me. Although less alien that it once was. Indeed the airport car park bays (all reserved by Alipay) have a mind blowing number of luxury western cars in them. The Porsche, BMW and Range Rover have all found a vibrant environment here to in which to inhabit and multiply. We speed nonchalantly past two seperate car crashes – both just as they happened – but there are no rubber neckers here, just an angry mass of hooting to get past, and a total lack of interest or emotion, even less surprise.

The return journey is even more fraught. Drizzle, rush hour traffic and tardiness are a sizzling combination if you are of an adventurous disposition. Sadly I am not, and the relief when I get to the airport and climb down from the gleaming black mini van come battering ram, is palpable. This relief is soon replaced by apprehension upon check in when I hear the words “at least” before “2 hour delay”. The rest of the bureaucratic process of leaving China washed over me like a blur.

The plus side of the delay of course is that laid before me is a veritable smorgasbord of a golden opportunity for people watching. Whilst modern airports are the most graphic example of characterless global cloning going, thankfully the same cannot be said of the vibrant sea of humanity that transitionally inhabit them. Sure, the themes are the same. Some rushing, some definitely not. Some complaining. Some smoking. Some crying. Many buying. But the nuances are different. Somehow this seems to be a more regimental mass of humanity. Fewer leaders and individuals. More groups. More order. Officials mean business, and are mean with it. Children still play and roam, but even they somehow seem more respectful and curious. Less noisy. Less naughty. An elongated gaggle of excited, boisterous, orange cap wearing holiday makers crocodile their way across the expansive terminal to their gate, obediently following the flag. Yet there are signs of a less regimented future as well. A rebellious woman rails at a security officer at some officious slight. Of course, the officer wins the “discussion”, barking back his own orders in a thinly veiled all out verbal assault, but the challenge is already laid down, and witnessed by the hordes. All of a sudden there are signs of individuality everywhere, and the changing times will continue to accelerate this.

Finally we set of and in due course, some 15 hours after entering, I fly out of China. As the soothing operatic music kicks in once again, as we ascend, I reflect further. In truth the modern march towards a global community will continue to gather momentum. The pace of change will only increase. The housing, the driving, the airports and the people – all in their own way are morphing and steadily creating a global fusion. Cultures will always remain different, and we should celebrate the differences as they are what make travel and life diverse and interesting, but more than ever before these same cultures will all move relentlessly towards one homogeneous mass of humanity. Same aspirations. Same motivations. Similar tools and rules. Just executed differently. For now. I am genuinely pleased that I will not be around to see its conclusion, but here and now, I am incredibly grateful to be able to travel and witness the great journey that humanity is undertaking. And in China, with its scale and pace, this journey is at its most compelling.